Businesses that Use Dark Patterns Deserve to Go Under

What is a dark pattern?

Last night I switched away from Verizon as my cell phone provider. The process of wrestling my phone number out of their grubby clutches and into control of my new carrier had me raving like a madman by the end of the night. I had a similar experience when trying to quit my local Vasa gym. While I’m sure you’re familiar with an unnecessarily difficult cancellation process, this might be the first time you’ve heard it referred to as a “dark pattern”.

According to Wikipedia a dark pattern is:

“A user interface that has been carefully crafted to trick users into doing things, such as buying overpriced insurance with their purchase or signing up for recurring bills.”

They then elaborate on a specific type of dark pattern that I’ll be focusing on today, the “Roach Motel”:

A “roach motel” or a “trammel net” design provides an easy or straightforward path to get in but a difficult path to get out.

In short, there are companies out there that are truly awful*. No matter your stance on the politics of Capitalism, Socialism, or any other economic -ism, I’d urge you to consider joining me in the belief that companies who employ these “dark patterns” do not deserve to exist. The “free market thesis” relies on the idea that consumers are out in the market making (somewhat) rational choices about which products and services they choose to spend their money on. Let me provide an anecdote in regard to that thesis.

Last night, I made a decision to get more cellular data at a lower cost, exercising my free market rationality. Smith would be proud. Anyhow, about 2 hours into the hair-pulling process of leaving Verizon, my wife tried to console me by saying “maybe we should just pay the extra $40/mo for unlimited data on Verizon”, and that’s when I lost my mind. My incredibly smart and well-meaning wife was tempted to stay with a sub-par product, just because the hassle of cancelling was engineered to be so infuriating. Needless to say, I spent another couple of hours calling support, resetting transfer pins, swapping sim cards in and out, and trying to trick the damn customer service bot into giving me a human to talk to.

I finally emerged victorious, but it cost my sanity. 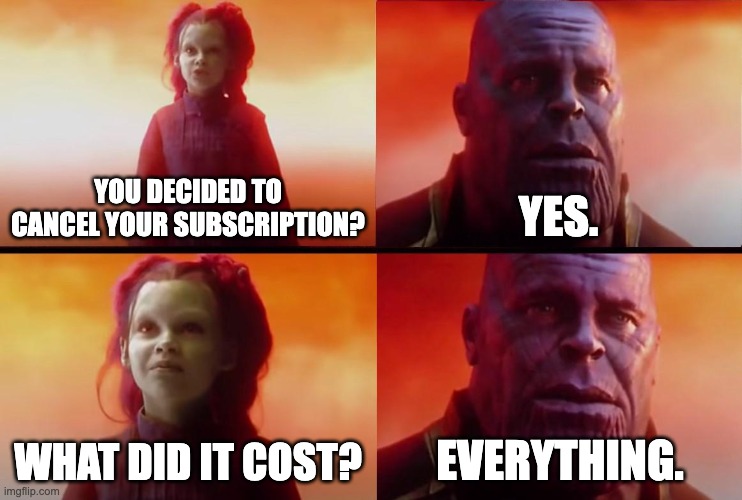 Here are some stats:

I’m a software engineer, and for the last couple of years I’ve had a little side business on Boot.dev where I publish computer science courses. It’s a subscription-based model with a single lifetime payment option for those who hate the hassle of subscriptions like I do. Cancelling is really easy. You go to your settings page and click a button. You do not need to:

If you don’t want to use my product anymore, I don’t want you paying me. Maybe it’s easy to possess the absolute minimum amount of business ethics as a small operation with only two people, but after last night, I couldn’t live with myself if I worked for a company that did business any other way. And to be clear, I’m not flexing about my lofty personal morality here. I think most people are inherently fair-minded in this way. There is something special about how large corporations are able to do terribly unethical things while the humans inside don’t feel personally responsible.

While I’m sure these companies do hang onto revenue that they would otherwise lose (if they weren’t making more money they wouldn’t be doing it), I have an interesting story from last week. On Boot.dev we have a 30-day refund policy, no questions asked. If someone emails me saying they’re unhappy with the platform, I send them a refund, it’s as simple as that.

Anyhow, last week someone did just that. I immediately issued a refund, then emailed back asking what was missing from the platform that made them want to sign up, but then want to quit only a few days later. They responded by saying that they were hoping for more projects to work on their local machine, and didn’t want to do all their learning in the browser. I messaged back saying that we have 3 such projects, they are just further down in the curriculum. He said he didn’t know, and that on second thought I shouldn’t cancel his subscription. I told him I had already cancelled it, but that if he wanted to sign up again he could do so easily, and he did.

What can we do about dark patterns?

The FTC recently released a statement about dark patterns. I would personally like something specifically about “Roach motels”. Something like, “cancelling a subscription can’t take any more time on average than creating it.” Obviously the actual law would need to be more nuanced and handle some weird edge cases, but I’m far from happy with the state of many consumer subscription companies out there.

Good luck, and don’t let them get away with it.